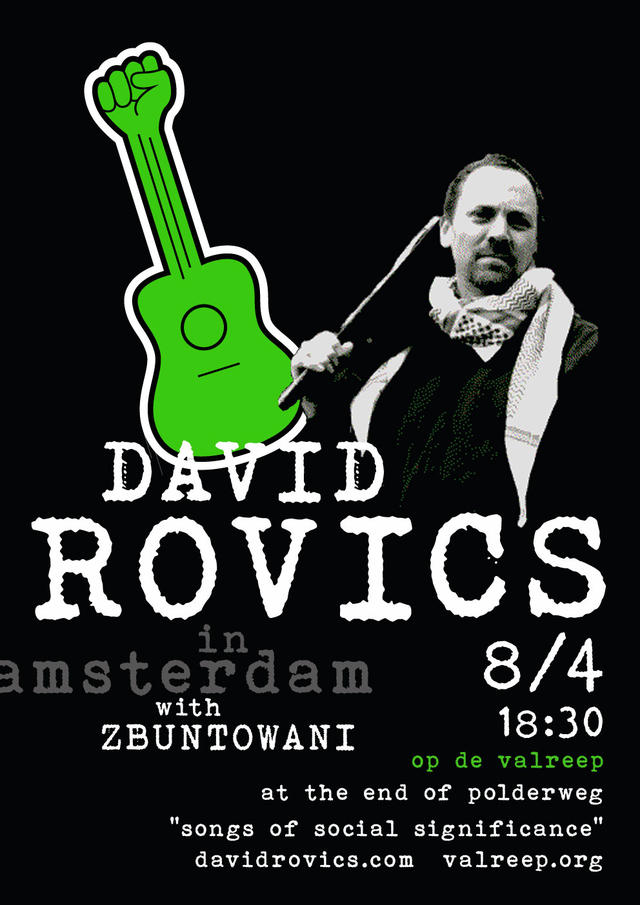 Announcement in English:
David Rovics, peace poet and troubadour, is on tour through Europe.
Coming week-end he will be in the Netherlands.
On Friday April 6th in Burgers, Hertogstraat 2, Eindhoven.
On Sunday April 8th in Valreep, at the end of the Polderweg Amsterdam.
Support act: Zbuntowani (punk one man band).
David cannot tour for free so contributions are reguired or requested.

David Rovics grew up in a family of classical musicians in Wilton, Connecticut, and became a fan of populist regimes early on. By the early 90's he was a full-time busker in the Boston subways and by the mid-90's he was traveling the world as a professional flat-picking rabble-rouser. These days David lives with his family in Portland, Oregon and tours regularly on four continents, playing for audiences large and small at cafes, pubs, universities, churches, union halls and protest rallies. He has shared the stage with a veritable of who's who of the left in two dozen countries, and has had his music featured on Democracy Now!, BBC, Al-Jazeera and other networks. His essays are published regularly on CounterPunch elsewhere, and the 200+ songs he makes available for free on the web have been downloaded more than a million times. Most importantly, he's really good. He will make you laugh, he will make you cry, he will make the revolution irresistible.

Conversations with Dr. Don - A very good hour-long interview on community TV in Gresham, Oregon with me conducted by Dr Don Baham.