Bolivia climate change talks to give poor a voice 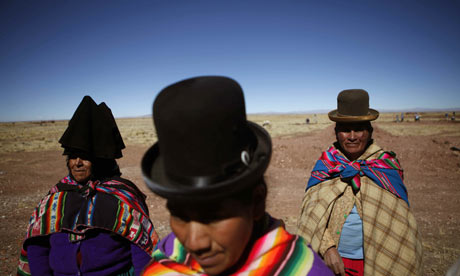 Quispe, an Aymara indigenous leader, is heading for Bolivia's central city of Cochabamba for the World People's Conference on Climate Change and the Rights of Mother Earth, the grassroots alternative to last year's ill-fated UN talks in Copenhagen.

At least 15,000 people from worldwide indigenous movements and civil-society groups, as well as presidents, scientists, activists and observers from 90 governments, are expected to attend what is being called the "Woodstock" of climate change summits.

"According to some analyses, about 80% of the world's pollution comes from developed nations and harms, mostly, developing nations. So we feel we have to do something, we must be heard, we must be compensated," says Quispe, who last December lobbied the case of his community at Copenhagen.

"The COP15 was a total failure, so brother President Evo Morales has decided to call for this climate change conference to do something about it. We the people are the ones that should take the lead on how to tackle the climate crisis," says Quispe.

Even if the Cochabamba meeting will have no bearing on the UN climate talks, the idea is to give a voice to the world's poorest people – those most affected by climate change – and to make governments more aware of their plight.

The main goal is to present draft proposals to the UN climate meeting due to be held in Mexico later this year.

Morales will also use the meeting to announce what could be the world's largest referendum, with up to 2 billion people being asked to vote on ways out of the climate crisis. Bolivia wants to create a UN charter of rights and to draft an action plan to set up an international climate justice tribunal.

"The only way to get climate negotiations back on track, not just for Bolivia or other countries, but for all of life, biodiversity, our Mother Earth, is to put civil society back into the process. The only thing that can save mankind from a [climate] tragedy is the exercise of global democracy," said Bolivia's UN ambassador, Pablo Solon.

"There will be no secret discussions behind closed doors. The debate and the proposals will be led by communities on the frontlines of climate change and by organisations and individuals from civil society dedicated to tackling the climate crisis," he added.

Bolivia is playing an increasingly important role in the climate negotiations by leading attempts to force developed countries to slash their emissions further than they have so far pledged.

It was one of seven countries that refused to sign up to the deal that emerged from Copenhagen, incurring the wrath of Britain and the US, which this month withdrew $3.5m (£2.3m) of climate aid from Bolivia.

Last April, the UN general assembly approved Morales' initiative of launching the International Mother Earth Day every 22 April to protect the rights of the Andean divinity, Pachamama (Mother Earth), and of "all living beings".

"What is behind all this discussion is that we have broken the harmony with Mother Earth, with nature, and because we have broken that harmony we are now suffering the consequences of climate change," said Solon.

In an office plastered with images of Che Guevara, Solon says Bolivia is taking the initiative because of its indigenous constituency. "Things are moving in a bad direction. Governments know it, scientists know it, but things are not changing. I would say this is the only scenario to make a balance between the pressure that at this moment the corporations are putting on governments, versus the pressure that can emerge from civil society."