Today we have independently taken use of the building located on the Voorstraat 36. Our motivations for this action are the declining opportunities for acquiring affordable housing (largely caused by the breakdown of social housing), the increasing repression of every from of self-determination and alternative social organization (as once again has been shown by the recent eviction of the Valreep in Amsterdam), as well as our dissent with the application and execution of the law 'Kraken en Leegstand'1, (squatting and vacant buildings) that has been in put into use on the first of October 2010. Today its nearing four years after its implementation, and as expressed by article VIA of the law Kraken en Leegstand, it will soon be up for evaluation. Considering our opinion that the effectivity of this law in practice is extremely disputable and the effects do not approach its aimed goals whatsoever, we now want to raise our voices loud and clearly; against vacant buildings the municipality doesn't do anything, but we do!

Background of the building on the Voorstraat 36
The building on the Voorstraat 36 was until 2011 being used by the call-center Leenart & Heemskerk. This call-center went bankrupt in 2011 after the revelation of a large-scale fraud conspired with KPN. 2 The owner of the building is NOX west b.v., a subsidiary of Blaustein CS..3 According to the website belegginspanden.nl there is still a dubious ongoing lease with L&H until the 31st of December 2015.4
On the company NOX west b.v. little information can be found. Supposedly it should be a 'information and communication' company.5 The fact that a 'information and communication' company cannot be found to be owning a website appears very strange and it seems therefore that the building is basically just owned by its parent company Blaustein. Blaustein is a large juridical company that is specialized in real-estate, taxes and insurances. Speculation with buildings seems to be fitting well with the orientation of such a company.
Last Monday it was yet again reconfirmed that the squatting part of the law of Kraken en Leegstand, is actively being executed, while the part about vacant buildings is not. A group of people attempted to find a new destination for the building, but got obstructed by police.6

On the law 'Kraken en Leegstand'
On the first of October 2010 the law 'Kraken en Leegstand' has been put into use. As can be derived from its name as well, at its introduction this law had a clear dual objective; the reduction of squatting activities as well as the reduction of vacant. The integration of these two subjects is not entirely out of the ordinary, as squatting and vacant buildings are inextricably connected. As also emphasized by RIGO Research en Advies BV in their evaluation of the law 1 year after its implementation (executed in order of the ministry of BZK/WBI): "the reasoning [behind the law] is that a more strict approach of vacancies reduces the possibility of squatting. At the same time it has to be prevented that a more strict approach to squatting unintentionally leads to more vacancies."7

Part of the law that relates to squatting entails that the unlawful sojourning in a building has been declared illegal. The maximum jail sentence is two years. Although owners of a squatted buildings have to report this themselves to the police, it is up to them (the State) to decide whether or not to proceed to eviction. When it is clear that lasting vacancy will be the result of such an action, the squatters should (in theory) not be evicted. Regardless of the fact that the claims and arguments of property owners with regards to the future use of a building usually contain little substantiation and are not put into practice, the police often decides to evict anyway.
The second part of the law is supposed to counter and reduce vacant buildings. As vacancy is considered a social problem, this part of the law is meant to provide municipalities with an additional tool that can be used to counteract vacancy in non-residential spaces. Factually it gives municipalities the opportunity (but not the obligation) to install a so called 'leegstandsverordening' (vacancy regulation), which can – among others – include: 1) A notification obligation of vacancies in office-buildings and commercial spaces, which obliges property owners to report the vacancy of certain buildings. 2) A discussion about a solution to the vacancy with the municipality and other potential stakeholders, and 3) a binding nomination, with which the municipality can suggest users for the vacant building to the owner.8 In practice, there are very few municipalities that have applied this part of the law, while at the same time the two main municipalities that have decided to use this law – Tilburg and Amsterdam – have raised critical voices on its effectiveness.

Evaluatie of the law
Today – 22 June 2014 – nearly four years have passes since the law came into force. As emphasized before, it appears that, contrary to its original objective – the reduction of squatting as well as vacant buildings – this law has been mostly applied with regards to the reduction of squatting, whereas the reduction of vacant buildings has largely been neglected.
Where in 2007 around 4.500.000 square meters of business space was vacant, in 2012 DTZ Zadelhoff calculated the amount of vacant business space on 6.975.000 square meters (14%). Most recent figures show that 15,7 % of the Dutch office buildings are empty, which comes down to 7.754.000 m2.9
The failure of the law Kraken en Leegstand has recently also been emphasized by Amsterdam councilors Freek Ossel (living) and Maarten van Poelgeest (spatial planning), in a letter to minister Stef Blok (living, VVD). From the municipality of Tilburg comparable criticism has been expressed.10 Although above comments undoubtedly will emerge from the forthcoming evaluation of the law, it is uncertain to what extent this will make a difference in practice.

Future perspective
We cannot and do not want to wait for slow changes of law of which we will just have to see if they will actually change anything. Besides that, we feel there is to little being done about the amount of affordable living space on offer, and that within the scarce offer the freedom to develop artistic, musical and/or political initiatives is often very limited. As long as the municipality continues to protect dodgy homeowners, speculators and anti-social housing corporations, as well as contributes to the breakdown of social housing, we will not hesitate to take inititives independently. 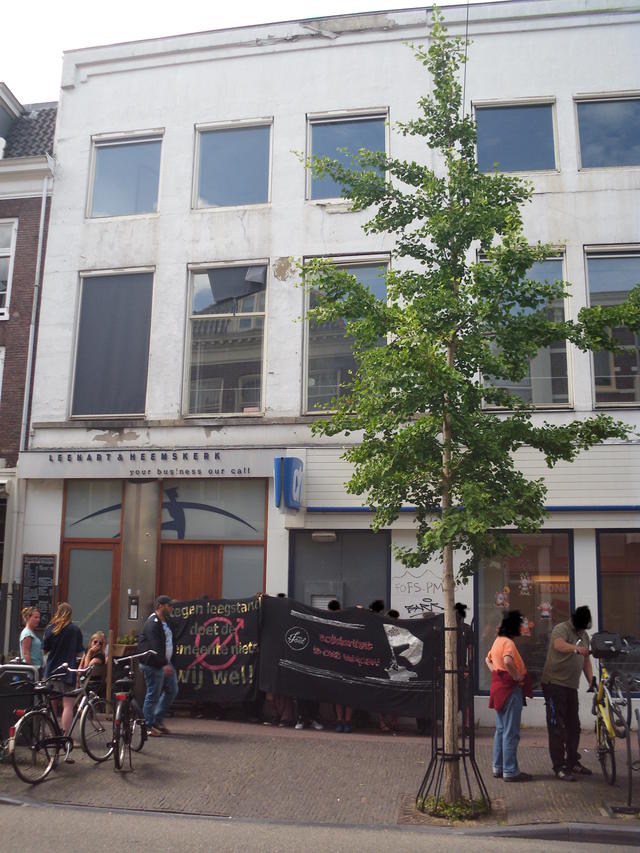 Very informative, I enjoyed the read.