here are the pages of this green washers event.
http://www.worldbiofuelsmarkets.com
Our planet not Your buisness! Create resistance !!!
Just after the Carbon trading finished RAI Amsterdam is holding another event of "green capitalism". Another "green wash" sollution would be promoted,discussed... Agro fuels or rather bio fools - business like usual. In cost of our planet rich people would make money on someones hunger, deforestation and on our children's future. Corporations like like Shell, GDF Suez, Chevron and other who are destroying the planet and peoples life from long time are trying to (bio) fool us that's this is the solution for climate change. In reality is worse even than oil and fossil fuels.
more below 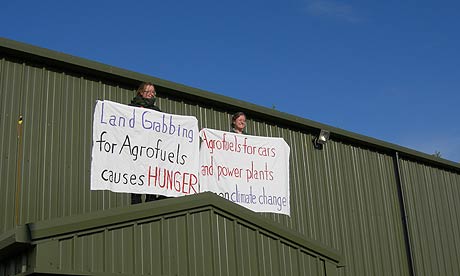 Deforestation, peatland destruction and nitrogen fertiliser use mean that agrofuels are actually worse for the climate than fossil fuel. Paul Crutzen (nobel prize-winner) suggests that rapeseed biodiesel is up to 70% worse for climate change than ordinary fossil diesel (even though it's grown in the UK so involves no deforestation or peatland destruction) due to nitrous oxide emissions from nitrogen fertiliser which is a 300x more damaging greenhouse gas than CO2.
In the global South people are being evicted from their lands to make way for agrofuel plantations, often violently with deaths and human rights abuses taking place. In Argentina 200,000 families and in Paraguay 100,000 families have been evicted due to soya expansion. These are just 2 examples but this is happening on a wide scale in South-east Asia, India, Tanzania, Ethiopia, Colombia and the list goes on.

Food prices are soaring as a result of agrofuels. According to Jean Ziegler (until recently the UN special rapporteur on the right to food) there are 12 million more people going hungry now than a year ago due to rising food prices, something which agrofuels are a big contributer to.
Instead we need to dramatically reduce fossil fuel use, live more locally and improve public transport.