Refugees got new shelter from the squatters 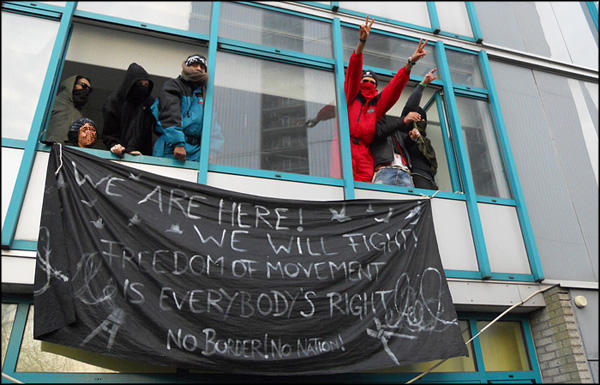 On Saturday, the 'We Are Here' group of refugees found a new home at Kralenbeek 100 in Amsterdam.

Almost two weeks ago they were evicted from their previous squat, the Vluchtkantoor on Weteringsschans, and some of the group found temporary shelter at the Havenstraat. Since then a group of 90 have spent two weeks wandering through the city, finding shelter each night with friends and social centres. Now there is a new building squatted, in the south of Amsterdam.

In September 2012 'We Are Here' started a tent camp on the Notweg. They stated 'We are here, we can not go back to our home country, we can not go to another country, and we can not stay here'. They asked for no more than a 'normal life'. After Notweg, there were squat actions with the Vluchtkerk, the Vluchtflat and the Vluchtkantoor. Now there is a new location, the Vluchtgarage (Vluchtelingen = refugees in Dutch and the group itself chooses this term).

The new location is the office part of an old parking garage and is owned by the city council. The building has stood empty for years, and is slowly decaying. There is a creative plan for the building, which 'We Are Here' do not want to prevent from happening. In the meantime, however, they would like to live there.